Spanish growth was already showing signs of slowing in 2018. Growth is expected to moderate further in 2019. The labour market will remain on a positive trend, with a continued decline in the unemployment rate, but job creation is projected to be less dynamic. The slight acceleration in wages, driven by the minimum wage hike and the increase in public sector pensions, should lead to a rise in disposable income. However, this gain will mainly benefit savings. Household consumption is set to decline further, especially in durable consumer goods. Conversely, accommodative financing conditions should continue to support growth in residential construction. The vigorous real estate market will likely continue to fuel the surge in investment, hampered by a slight slowdown in the corporate sector. Despite an external environment characterised by a high level of uncertainty over increased protectionism and a gloomy outlook in the eurozone, net exports are once again expected to make a positive contribution. As the effects of euro appreciation dissipate, exports are set to strengthen as they continue to capitalise on competitiveness gains.

The budget deficit is gradually narrowing, but by less than required under the stability programme

The strong economic recovery since 2015 combined with fiscal consolidation under the European Excessive Deficit Mechanism have contributed to a gradual readjustment in the country’s public finances. Spain, the last eurozone country still subject to the corrective arm of the Stability and Growth Pact, emerged from the mechanism in 2018 with a government deficit of less than 3%. In 2019, the deficit is expected to continue to shrink, but it is difficult to determine to what extent. Pedro Sanchez’s socialist government presented its budget proposals to the Commission in October 2018, but has yet to have them approved by both chambers of the Spanish Parliament. Despite the support of the radical left-wing Podémos party, the government has only a slender majority and will struggle to get its budgetary policy ratified. The finance law presented by the government proposes to cut the government deficit to 1.8% of GDP. Expenditure is expected to decrease only slightly and to finance new social measures such as the increase in social security contributions due to the hike in the minimum wage, the indexing of pensions to inflation and the increase in social transfers (child protection, long-term care and paternity leave). These measures will be financed by increasing the taxation of dividends from large companies (domestic and foreign), as well as high-income households, and by introducing new taxes, including environmental, digital services and financial transaction taxes. If the budget is not passed, the 2018 budget will be repeated, leading, on a constant policy basis, to a smaller reduction in the government deficit (2.2% of GDP) and an unchanged structural balance. Presented as part of the European semester, the Spanish budget was rejected by the Commission, which considers that even if Pedro Sanchez were to implement these measures, the government and structural deficits would still exceed those set by the government, breaking the commitments made under the Stability Programme. Public debt is expected to decline only slightly, at a slower pace than that set by the stability programme. However, this decline is mainly due to cyclical factors such as lower interest rates and higher inflation.

With a fragile government, snap elections could be on the way in 2019

In May 2018, Pedro Sanchez, the leader of the Spanish Socialist Party (PSOE), won, for the first time in the history of Spanish democracy, a non-confidence motion against former Prime Minister Mariano Rajoy after the verdict in the Gurtel case found that Popular Party members were involved in a corruption scandal. The socialist government, which is supported by the radical left-wing Podemos Party and the Catalan and Basque independence parties, remains on a fragile footing since it has a tiny majority with only 80 deputies. It is therefore at the mercy of the independence vote, particularly that of the Catalan party, making it dependent on relations between the State and the region. Accordingly, Mr Sanchez’s government may have great difficulty passing its budget, which is the cornerstone of its social policy, especially since the PSOE does not hold a majority in the Senate. Parliamentary elections could thus be called. Since it is well ahead in the polls, the PSOE has not ruled out calling elections, but the party will have to choose the best time to do so. Various elections are already scheduled to take place in 2019, with municipal, regional and European elections all being held on May 26, 2019. In the regional elections held in December 2018 in Andalusia, the bastion of the Spanish left, the PSOE, which has run the region since 1982, failed to obtain a majority.

Cheques are widely used for corporate transactions in Spain. They offer similar legal safeguards under the juicio cambiario (Civil Prodecures Code) in the event of default. The same is true of promissory notes (pagaré), which, like bills of exchange and cheques, are instruments enforceable by law. If unpaid, they are recorded in the registry of unpaid acceptances (RAI, Registro de Aceptationes Impagadas). Attached to the Centre for Interbank Cooperation, the RAI is the country’s most important registry. It records all commercial payment defaults of over €300, thus allowing banks and other deposit institutions to verify a company’s payment record before extending credit.

In contrast, bills of exchange are rarely used commercially. In the event of defaults, they offer creditors certain safeguards, including access to special collection proceedings with instruments for negotiation under the civil procedures code (juicio cambiario). Bills of exchange that have been guaranteed by a bank can be somewhat difficult to obtain, but they do limit the risk of payment default by offering creditors recourse to the endorser of the bill of exchange.

Electronic transfers via the SWIFT network, widely used by Spanish banks, are a fast, fairly reliable and cheap payment instrument, provided the purchaser orders payment in good faith. If the buyer fails to order a transfer, the legal recourse is to institute ordinary proceedings, based on the unpaid invoice. Banks in Spain have also been implementing SEPA standards for euro-denominated payments.

Unless there are special clauses included in the commercial contract, the applicable rate of interest is that applied by the European Central Bank in its most recent refinancing operation (performed prior to the first calendar day of the half year concerned), with an additional eight percentage points. The rate is published by the Finance Minister every six months, in the Boletín Oficial del Estado. The statute of limitations for ordinary claims is five years.

There are no formalities or conditions for the dispatch of a reminder to the debtor, but it is advisable to send a claim to the debtor first. The creditor can obtain guarantees for the payment of the debt.

If no settlement agreement is reached with the customer, the creditor can initiate a legal collection process, using civil procedure law (ley de Enjuiciamento civil).

Exchange proceedings are used for claims based on bills of exchange, promissory notes and cheques. A judge of the first instance (juzgado de primera instancia) verifies that the ‘exchange title’ has been correctly implemented and then orders the debtor to make payment of both the principal amount and the late interests and costs, within ten days. The judge will also order a seizure for security (embargo preventivo) on the debtor’s assets, equivalent to the outstanding amount. The debtor has ten days to dispute the ruling.

If there is no payment received or opposition within the prescribed time, the judge will order enforcement measures. If necessary, the judicial representative will carry out attachment. When claims are contested, a court hearing is held to examine both parties’ arguments and a judgement should be handed down within ten additional days. Although this is time frame that is prescribed under Spanish law, it is rarely adhered to by the courts.

In addition to the juicio cambiario, creditors unable to reach a payment settlement out of court can enforce their rights through a civil procedure (juicio declarativo). Civil procedures are divided into ordinary proceedings (juicio ordinario) for claims of over €6,000 and oral proceedings (juicio verbal) – a more simplified system – for smaller claims. Both proceedings are initiated with a lawsuit served on the debtor.

The claimant is required to explain the facts of his claim and provide all supporting documents – either originals, or copies that have been certified by a public notary – on filing its initial petition. Prior to the investigation of the case, the judge will summon the parties during a first hearing (audiencia previa), using ordinary proceedings, to encourage a conciliation. If this is unsuccessful, the lawsuit will be pursued. The court can then order specific measures to clarify issues or facts that remain unclear, before passing judgment.

For monetary, liquid and overdue claims, whatever the outstanding amount (previously limited to up to €250,000), creditors can now benefit from a more flexible summary procedure. The filing of a petición inicial is directly submitted to the judge of first instance (juzgado de primera instancia) where the debtor is located. After reviewing the supporting documents, the judge can order the debtor to pay within 20 days.

If the debtor does not respond, the judicial representative will inform the judge and request confirmation of the decision in favour of the initial request. The judicial representative then hands down a ruling confirming the conclusion of monitory proceedings, which is transmitted to the creditor. This allows the creditor to contact the Enforcement Office for the next phase. If the debtor disputes the ruling and provides motivated arguments for this within a written statement signed by a barrister and a solicitor, a full trial on the case will be instigated.

Enforcement of a Legal Decision

When all appeal venues have been exhausted, domestic court decisions become enforceable. If the debtor fails to satisfy the judgment within 20 days, the Court Clerk, upon request, can seek out the debtor’s assets and seize them.

Decisions on foreign awards rendered by EU countries benefit from enforcement conditions, such as EU Payment orders and the European Enforcement Order. Judgements rendered by non-EU countries are recognised and enforced, provided that the issuing country is party to a bilateral or multilateral agreement with Spain. If no such agreement is in place, Spanish exequatur proceedings will be followed.

A debtor has the possibility of negotiating a formal refinancing agreement (acuerdo de refinanciacion formal) with his creditors. This agreement must be signed by the court. Within this agreement, the parties are free to write off as much of the debt as they deem necessary.

During these proceedings, the debtor may file for liquidation:

The judicial administration draws up a liquidation plan in order to realise (sell) the assets, consisting of the bankruptcy estate, which is submitted to the judge for approval.

Liquidation in Spain aims to sell the company’s assets. During this phase, the company retains its legal persona. Liquidators are appointed to execute the process and they can also take over the function of administrative body and company representative.

The liquidator cannot redistribute the company’s assets among its associates until all of its creditors have been paid and payment demands against the company have been settled. Aggrieved creditors can contest transactions that they believe may have taken place illegally during the allocation of the assets. 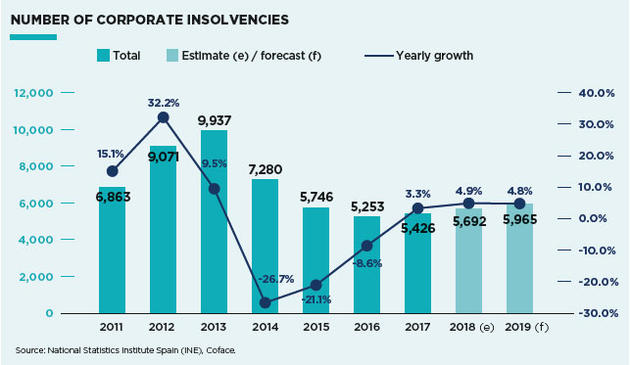