However the growth in the Emirates remains dependent on hydrocarbon revenues, mainly those of Abu Dhabi, despite an active policy of economic diversification. This leaves the country vulnerable to the changes in global economic trend as the latter has an impact on the production and prices of hydrocarbon products.

The reason of Dubai World’s default in 2009 was mainly the burst of a property bubble resulting from an over - development of high-end luxury projects relying too much on foreign capital. Since then the country has completed an important part of the debt restructuring. In February and March 2014, Dubai managed to refinance favorably its debt maturing this year (around 20 billion USD) with Abu Dhabi and the UAE central bank.

Today’s question is whether the country will see a renewed property price bubble amid the increasing number of new real estate launches in Dubai and the rising housing prices in some areas back to near pre-crisis level.

The lack of transparency and poor legislative controls also contributed to the collapse of the property market. Therefore the introduction of regulatory measures by the authorities aiming at avoiding another bubble is promising for the country’s economy.The introduction of the new Companies Law which brings gradual reforms to the corporate governance is also seen as a major progress. Coface upgraded its business climate assessment about the country based on this law.

Coface evaluates the UAE’s country assessment which measures corporate risk, as A3. The business climate which considers factors such as the availability of company reports, their reliability and the e ectiveness of legal system stands at A3. Coface uses a seven-level ranking. In ascending order of risk, these are: A1, A2, A3, A4, B, C and D

The UAE stands away from the protest movements in the Arab countries. The country is a federation of seven emirates, Dubai and Abu Dhabi are the largest ones. Situated in a key geostrategic area, the country aims to maintain a diplomatic balance between its membership of the Arab world and its alliance with western countries, particularly the United States. The business environment is considered as one of the most favorable in the region (infrastructure quality, government e ectiveness, etc.) , even if the Dubai World crisis has highlighted a lack of transparency on the public accounts, the status of public entities, the banks and businesses at that time.

In this panorama, we will focus on hydrocarbons, agro food and retail sectors as these are the key elements of the real sector in the country. The UAE is a major crude oil producer in the world. Around 94 percent of the country’s oil resources are in Abu Dhabi. In 2013, the hydrocarbon sector accounted for one third of the GDP and hydrocarbon exports were about one third of total exports. Public finances of the UAE remain highly dependent on hydrocarbon revenues, despite the ongoing diversification of the economy. The oil accounted for almost 80 percent of the budget revenues in 2013. This ratio is expected to decrease slightly to 76.5 percent in 2014. The main risks in this sector would be the corporate profitability depending on the government supports and the balancing of the hydrocarbon supply and demand in the country. The regional conflicts can also represent a source of risk. The agro food sector is becoming increasingly important for the UAE in line with the growing population and per capita income. However the arable lands is very limited and the climate is not very favorable for the agricultural activities. The government supports the agriculture sector and food processing industry. Heavy dependence on food imports creates a risk for the country in case of a shortage in food supply. The government’s control over the food prices may also weigh negatively on the corporate profit margins. The retail sector is one of the fastest growing industries in the UAE on the back of increasing wealth, economic sustainability and strong domestic
consumption. The retail sales volume which is estimated at 114 billion AED in 2011 (31 billion USD) is expected to rise to 151 billion AED (41 billion USD) in 2015. The intense competition and the rise in real estate prices represent main risks for this
sector but these risks remain mitigated. Source: 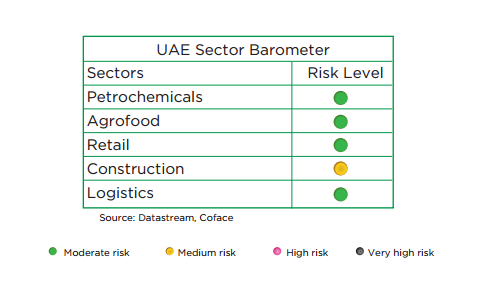 / 03 Part I:  A remarkable recovery after the debt crisis but financing needs still high